Driving in unsafe conditions due to inclement weather can be stressful and scary. A quick review of these tips for safe driving will prepare you to confidently face some of the most common conditions that can otherwise give cause for alarm to motorists.

Tips for Driving Safely in Snow or Ice

This guest post was written by Freedom Rims, a Responsible Military Lender since 1983. Freedom Rims offers rims financing for a variety of performance rims and tires, including chrome rims. We offer fast and convenient credit on a large inventory of tires and wheels with our military financing options.

How Often Should You Change Your Oil?

This is a great question and the answer can get a little confusing.  The Motorist Assurance Program has put together an article that explains the conditions that can affect how often you have your oil changed ~

“When asked, you may hear answers such as every 3000, 5000 or 7500 miles, or when the vehicle’s oil monitor indicates that this service is necessary. It is no wonder consumers are confused. The simplest answer… well, there is no simple answer! In fact, there is no interval that applies to most vehicles.

The engine serves as the heart of your vehicle, so changing its oil based on the manufacturer’s recommendation is perhaps the single most important thing that you can do to keep your vehicle’s engine running longer. However, you must read these recommendations closely to determine the correct interval; the interval that matches your vehicle’s operating conditions and your driving habits.

The normal interval listed in the owner’s manual applies to vehicles driven under ideal conditions. While you may consider your driving habits and operating conditions quite normal, read the fine print. Some exceptions to Normal driving include:

These conditions commonly appear in the description of severe service driving.

AMRA/MAP advises that you read your owner’s manual to locate the correct interval.

Although each manufacturer offers different intervals and descriptions, you may find that the proper interval for your vehicle and driving conditions could fall somewhere between 3500 and 5000 miles. What about the 3000 mile oil change myth?

Is that wasting natural resources?

Your driving type or vehicle usage may affect the maintenance intervals below.

You should follow the manufacturer’s service schedule that best matches your vehicle’s operating conditions.

Those recommendations may include:

Is it time for your next oil change?  Just click here to schedule your service appointment with Anderson Toyota or Lexus of Rockford.

It’s that time of year!  GRADUATION.  Here are some great tips if you’re thinking of buying your student a car as a graduation gift.

“When considering an automobile as a graduation present for that special young adult in your life there are some tips to consider before making your purchase.One: Make sure that the vehicle you are purchasing is in very good condition, if not new, and that it has a really solid warranty on it. Many times this car will be the first one your graduate has ever owned and you want to be sure that they are safe in it. Make sure it has not been in any previous accidents, that upkeep and maintenance has been documented and consistent and that all items, right down to the seatbelts, wind shield wipers, headlights and turning signals are in working order.Two: Check with Consumer Reports and online forums from actual customers of the make and model of the vehicle you are going to purchase. You want to make sure that you are buying a vehicle with a solid reputation for performance and safety.

Three: Purchase a vehicle for more than its good looks. Sure, most graduates would love a brand new Mustang for a gift but other factors must be taken into consideration, such as what type of weather will the car operate in (Winter is never a good season for a Mustang or many other brands or types of cars), how many passengers will be in it regularly, what type of trips will be made (long-term or short hauls), if you will be purchasing a conventional or hybrid model (taking into consideration the applicable tax breaks that come with the latter), how much storage is need in the actual vehicle itself, etc.

Four: Make sure that you check both the heater and the air conditioner in the car prior to purchasing it, if it is a used car. Replacing or repairing either of these items can be very costly, more costly than most brand new graduates can comfortably afford, and driving without them can prove quite uncomfortable and even downright dangerous.

Five: If the owner of the car lives in a cold climate, make sure to have the dealer rust proof it. This can be done prior to pick-up or you can have it done separately at a place such as Ziebart. The job is warrantied and guaranteed to prevent the car from rusting in inclement weather. It is a wise investment, well worth the relatively small amount that is charged for the service.

Other factors that you may want to take into consideration, or not, depending on your personality, responsibility towards the gift and graduate that you want to take, and cost are what the insurance costs are going to be and who will pay them initially, how much it will be to purchase the tag and title, and what type of warranties are purchased (GAP insurance is a wonderful investment above and beyond a typical warranty, and often charged separately, that more than pays for itself should an accident of unthinkable proportion occur). You might also want to consider how many miles per gallon the vehicle takes in gas; this is especially true right now with the price of fuel rising steadily.

Purchasing a vehicle for your graduate can be the perfect gift for introducing them to their new adult life but exercising caution is always advised when doing so. Make sure the driver knows the responsibilities that come along with owning a vehicle (oil changes, engine maintenance, the aforementioned insurance costs, etc.) and that they must be aware of when these actions are needed and take prompt measures towards them to ensure the longevity of the life of the vehicle. Also, if the graduate is to live at home still, and rules will be in place for curfew, despite their newfound freedoms, be sure those are discussed well in advance to the gift giving as well.”

The stats on women car buyers

Buying a car is seen as a daunting task.  Nobody gets excited about the prospect of walking into a showroom and having to deal with negotiations and salespeople.  We try to make it as simple as possible here at Anderson.  Here’s a link to a great article on car buyers, men vs. women, how they do their research and prepare to purchase a vehicle. 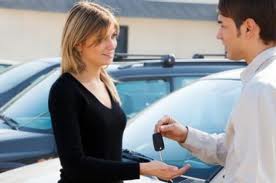 This is awesome news that was announced by Toyota on May 8th, 2012:

Approximately $30 Million in Total Investment and 80 New Jobs
ERLANGER, Ky. (May 8, 2012) — Toyota announced today it will increase annual engine assembly capacity of 4-cylinder engines by more than 100,000 at its plant in Georgetown, Ky. The increase will begin August 2013. The approximately $30 million project will create about 80 new jobs.
Toyota Motor Manufacturing, Kentucky (TMMK) currently assembles engines for the Avalon, Camry and Venza, all built at TMMK.  The capacity increase will supply engines for TMMK’s Camry and Camry Hybrid and RAV4 in Woodstock, Ontario.
“Twenty six years ago, I took part in Toyota’s groundbreaking in Georgetown, which was filled with excitement for Kentucky’s future,” Governor Beshear said.  “Today, we still have that same excitement for Toyota’s past, present and future in the Commonwealth.  This latest expansion brings Toyota’s total investment to nearly $6 billion, meaning billions of dollars in incomes for thousands of Kentuckians, changing lives, strengthening our economy, and improving the Commonwealth.”
The increase will raise TMMK total employment to approximately 6,700 and total plant investment to more than $5.96 billion.
“This is great news for our team members and our company,” said Wil James, president of TMMK.  “This project is the result of the strong partnerships we have locally and across the state, which will help grow our business and strengthen the communities where we do business.”
Today’s announcement is the latest in a string of production increase announcements since February including Toyota plants in Indiana, West Virginia and Canada. The cumulative investment is approximately $565 million and nearly 1,000 jobs are being added.
“This engine production increase, and the several announcements before it, reflect our growing optimism for an improving North American market,” said Steve St. Angelo, executive vice president of Toyota Motor Engineering & Manufacturing North America, Inc.
This investment will increase engine production at the Kentucky plant to more than 500,000 annually and will increase total engine production in the United States to more than 1.2 million per year. Toyota also has engine plants in Alabama and West Virginia.